ALL ABOUT THAT WALL CONSTRUCTION

We have been asked a few times if we use drawings and if we can post them to show what we are planning. The answer is yes, we are developing a drawing set from scratch as we work but the fact that this project has been and will continue to be designed and detailed organically, based on feedback, consultation and available materials means a set of constantly evolving drawings that won’t be completed until we are done. These drawings will be more of a record of our thought process and ideas and less of a defined path of construction. On top of that, a corrupt file led to the loss of a week or so worth of work on our drawings. Anyways, Here are some of the details we have been thinking through accompanied by a semi-technical and probably boring thought process out loud.

We have been looking for a way to reduce the weight of the wall system and think we have come up with a good option. We are pretty confident that 2×4 stud walls are overkill for such a small space. Some RVs for example use only a 2×2 structure which is then strengthened by the skin that is applied. So we have always been thinking about how to reduce the weight and structural overkill of 2×4 lumber while maintaining a comparable wall thickness in order to properly insulate the space.

A few months back we sat in a restaurant discussing our future tiny house plans with an energy expert named Gary. Gary recommended the use of a C.I. (Continuously Insulated) panel on the exterior of our frame as a way to potentially use 2×3 construction while still incorporating a comparable thickness of rigid insulation as you would find in 2×4 wall. A continuously insulated panel can be ordered in a variety of sheathing and insulation thicknesses and then the two materials are laminated together using adhesive to create a rigid and well insulated sheathing system. By gluing and screwing the plywood side of the C.I. panel to our frame it becomes a ridged diaphragm and significantly increased the overall strength of the system. This seems to be a great option with the added benefit of reducing thermal bridging of the studs which means this wall composition could be lighter and perform as well if not better than a 2×4 thick wall. So to sum that up, we are using a thinner wall structure and taking the insulation that is lost in the reduction of wall thickness and placing it on the outside of our wall to create continuous layer of insulation all the way around.

We have been pretty adamant about using a rain screen system on the exterior of our walls. In a traditional wall composition a great amount of attention is placed on overlapping, caulking and sealing all joints to keep moisture out. But often times it is not IF water will get behind your siding but WHEN, and if it does penetrate into the wall, it may not have a place to escape which is not a good scenario. A rain screen system often times incorporates open joint cladding that is fixed to a spacer of some sort to create an air cavity behind the siding. While the cladding prevents most of the water from getting behind it, any water that does get into the cavity will make contact with the building wrap and either drip down and out of the wall cavity or evaporate because of the air movement through the cavity. This seems like a good option for a tiny house because of the potential difficulty in keeping joints and seams from moving/cracking/opening during transportation which is also when you may experience the highest wind pressure on the walls that would begin forcing water in through any compromised areas.

We also have been wrestling with the idea of using metal studs. Metal studs will be straighter than wood and will certainly be lighter which is a huge positive and our C.I. Panel would address the thermal bridging problem notorious with metal framing. But we are still shying away from them because it is a material-system that we have never worked with. How much time will it add due to the learning curve? Will the screws rattle out during transportation? And it would be more expensive as well. We have not completely ruled it out however.

Our meeting with Gary also led to one more helpful piece of information; the grand opening of something called the Leading Force Energy and Design Center right here in Yakima. A few weeks later I stopped in for the public unveiling and navigated my way through the beautiful showroom packed full of excited art, architecture, design and construction experts. Leading Force has brought together building industry professionals and their products from all facets of design and construction under one roof.  What I became so attracted to was the centers interest in education and big picture thinking. Rather than sell you a single product because you asked for a sustainable option, for instance a window, they help you understand that product or systems spot in a larger context of the sustainability ecosystem and educate you on how to maximize your goal of building and living in a sustainable environment. It didn’t take long for us to see how important this type of center was going to be for not only this project but for Yakima as well. 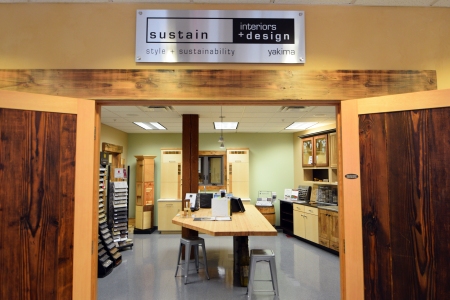 At the grand opening I had an opportunity to speak with Steve Weise who is the leading voice and energy behind the organization and implementation of the Leading Force Center and really appreciated his enthusiasm about our Micro dwelling project. We have since met with Steve multiple times to chat about SHED and his consultation and support has been invaluable as we try to hone in on and commit to the best wall system for this project that balances weight, performance, energy efficiency and cost.

On one occasion, we sat in Steve’s conference room and I elaborated on my ideal rain screen siding system using a horizontal wood cladding in which I had detailed out the notched and chamfered drip edge and perfect spacing to allow air movement while obscuring visual penetration into the wall cavity as well as the ½” furring strips required to create the air cavity behind the cladding and provide the screwing surface to fix the boards to. Steve patiently listened and once I was finished, followed up with “why don’t you use that” with a smirk on his face as he pointed out the door to some corrugated metal that he had quite elegantly used as an interior wall panel in the Leading Force Center. Steve had digested the most important information from our previous discussions and understood the performance of the rain screen envelope system we wanted to use while remaining objective about aesthetics for a moment, and suggested a really good alternative for reasons I will lay out shortly. I put up a playful and meager protest that most likely revolved around aesthetics as I internally hung onto my original idea of beautiful wood siding. Steve was quick to promise he wasn’t there to sway me in any particular direction, only to present viable options and we began laying out reasons that corrugated metal was in fact, a great option:

Recycled: Perhaps the most unique aspect of this corrugated metal is that it has already been used. The metal was actually used as roofing for over 50 years on a local apple bin canopy. 50 years in the Yakima Valley Sun and it looks more beautiful than when it was installed thanks to the matte patina time has created on the surface! When Steve was contracted to remove the apple bin canopy he recognized the potential to reuse the roofing and invested extra time and labor to carefully remove the sheets of metal without bending and ruining them. He even provided us with some documentation of them knocking the bin canopy over prior to removing the sheets.

Recyclable: Metal is a very recyclable material. Should it not be able to be reused as corrugated metal in its post SHED existence it can be recycled and turned into something else.

Durability: Corrugated metal will stand up to the sun, wind, rain and even road debris with-out the need for maintenance such as staining or painting.

Ease of Insulation: Remember that rather complex horizontal wood system I was dreaming up? We would have to either spend around $10 per square foot to purchase an installation ready system or spend A LOT of time acquiring the boards, ripping/planning/milling/cutting them to size and then probably seal and stain them. The metal siding does not require furring strips which reduces the thickness of the cladding composition which will help us stay with-in the 8’-6” width restriction. Also, there would be a lot of work involved in keeping the boards and small horizontal spaces even throughout installation for my original idea. There would also be a lot more hardware (money and time) to attach many individual pieces of wood to SHED rather than the large panels of metal.

Performance: Because the metal comes in large sheets we greatly reduce the number of seams for water to get through. With that said, because we are using this in a variation of a rain screen system, we are operating under the assumption that water will find its way through the cladding. By orienting the corrugated metal vertically we now have a built in wall cavity behind the metal that allows any water that gets behind the metal to meet the building wrap and either drip down or evaporate up out of the wall cavity. These vertical channels will allow our wall to breath and eliminate any water that ends up behind the metal.

Safety: It is non-combustible

Weight: This material is one of the lightest options for siding which is a huge benefit to this project.

Aesthetic: We have really grown to like the idea of the vertical corrugated metal including the modern agricultural-industrial aesthetic.

And with that…we committed to this beautiful material that is steeped in Yakima Valley history and is almost symbolic of the valleys sun, sweat and labor which offers an incredible way to tie our project to the agricultural industry that this city was built on. We told Steve we would take around 500 square feet of the reclaimed apple bin canopy roofing. We took a quick trip out to pick our [20] 2’x12 corrugated metal panels in the rain and put them in the back of Steve’s truck as he was kind enough to deliver them to the project site. One important decision down, and a few more to make before building vertical including the WINDOWS which we will discuss in the next post.

P.S. Whistler was stunning, and I came home with a pretty intense mustache… 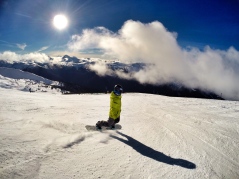 START ‘EM YOUNG: A guide to snowboarding with a toddler